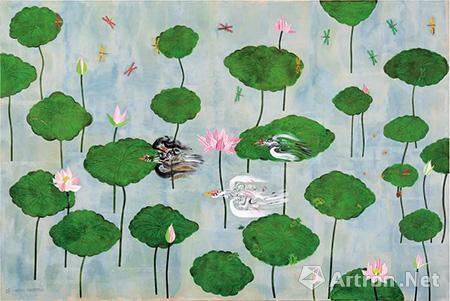 番鸭用冲的，过荷塘 The Dashing Muscovy Ducks, Rushing through the Lotus Pond

Born in 1932, the modern artist Hsia Yang paints “fuzzy” figures to represent his observations of life. Over the course of his long and varied career, Hsia has pursued a wide range of visual languages. His qualities include perseverance, harmony, tolerance, ingenuity, delight, and simplicity. He blends seriousness and play into his work, and presents stories of others that suggest his own life. Admiring his paintings, one can sense their profundity.

In 1951, Hsia studied art with Lee Chun-Shan and then started the Ton Fan Group with seven other artists. In 1963, he went to Europe for the first time and settled in Paris for five years. In 1968, he moved to New York, and then in 1992, returned to Taipei. After 2002, Hsia moved to Shanghai and has lived there since. His experience in the art world has been exceedingly rich and varied. Works in the exhibition Hsia Yan: Journey to Art are presented in chronological order under the themes Line Figures ; Momentum Shadows ; Sculpture Strengthening the Painterly Context; and Leisurely Drifting through Time and Space.

Subject matter in Hsia's work includes folk religion, myths, allegories, and legendary figures. By creating rushing figures composed of quivering lines, he intends to suggest allegorical meanings. With his fuzzy people, he dispenses with the meanings or likenesses originally associated with specific objects and instead explores the restlessness and alienation of life in the urban jungle. Variations in blurry brush strokes seem to form objects but actually do not, yet the clear momentum of his figures demonstrates the artist's clever pictorial language. Hsia happened to be living in New York in the 1970s when photorealism was becoming popular, and this influenced his painting style. He started depicting scenes of people moving in cityscapes, paying close attention to the details in these scenes and simulating rushing movement by blurring these parts. This creates a visual effect of an abruptly frozen moment, or can be seen as the extension of or variations on his fuzzy brushwork.

In the latter half of the 1990s, Hsia continued his fuzzy people series with 100 Faces (1994 - 1996) and Thirty-Six Portraits (2002), which are regarded as the most vivid expressions of his formal blurring technique. After 1999, Hsia developed a series of iron sculptures based on the same theme, exploring and transforming his painting language with a new medium. Since 2002, Hsia has been using paper cutting collage techniques and introducing witty verse into his paintings, especially in his monumental landscapes that include contemporary scenes of urban leisure. The paintings are incisive and humorous with fresh and lively colors and a fashionable rhythm. Overall, the series presents the artist’s wisdom and his high attainment of artistic freedom.Work for this exhibition was borrowed from museums, galleries, collectors, and the artist’s personal collection in Taiwan and Shanghai, and includes more than one-hundred splendid drawings, paintings, sculptures, and mixed media works spanning the period from the early 1950s to the present, and comprehensively featuring the artist’s oeuvre.